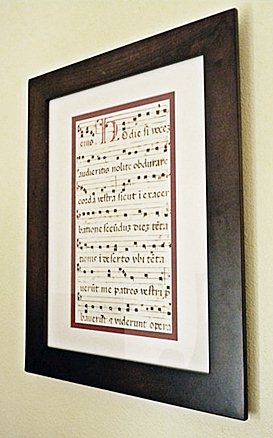 Music in the Church is not a means for entertainment but rather a universal language that at its best is capable of communicating the mysteries of a God who is both transcendent and immanent–bringing truth, goodness and beauty to a broken and fallen world in such need of the One who came “to reconcile all things to Himself” (Col. 1:20; II Cor. 5:18) and “make all things new” (Rev. 21:5).  As such, sacred music must not strive to find the pop culture’s lowest common denominator but reveal something of the highest goal of our striving.  Instead of pointing us to the base things of this world defined by our limited and limiting personal preferences, we aim for the Sursum Corda (the lifting up of our hearts) that we may ascend to meet the Christ who condescends to meet us.

So rather than relegating ourselves to the narrow confines of the 1970s-1990s and its “Contemporary Christian” sub-genre with “praise bands,” “worship teams,” and such, we avail ourselves to the thousands of years of the timeless hymns, canticles, Psalms and chants of the people of God, which end up being formative for a people who desire that God’s will “be done on earth as it is in heaven.”  Toward this end, we’re rooted in—but are by no means limited to—our Anglican musical heritage best known by composers such as John Blow, William Boyce, Benjamin Britten, William Byrd, John Dunstable, Edward Elgar, Orlando Gibbons, George Frederic Handel, Herbert Howells, John Merbecke, Thomas Morley, Hubert Parry, Henry Purcell, John Rutter, Martin Shaw, John Stainer, Charles Villiers Stanford, Thomas Tallis, John Taverner, Thomas Tomkins, Christopher Tye, Ralph Vaughan Williams, William Walton, Thomas Weelkes, Samuel Wesley, Healey Willan and Charles Wood.

And we have a surprising amount of fun doing so! Click on the following links (then click “Open” when prompted) to hear  Ascensiontide Evensong (recorded 5/23/2012) with members of choirs from Blessed Teresa of Calcutta Roman Catholic Church and St. Bartholomew’s, assisted by Fr. Frank Schuster from Blessed Teresa and Deacon Ed Miller: